Realizing a vision doesn’t mean blindly stepping off a cliff or dropping your paycheck on lottery tickets and trusting you’ll win. Skydivers carefully pack their own parachutes, scuba divers check their own gear and entrepreneurs write business plans. 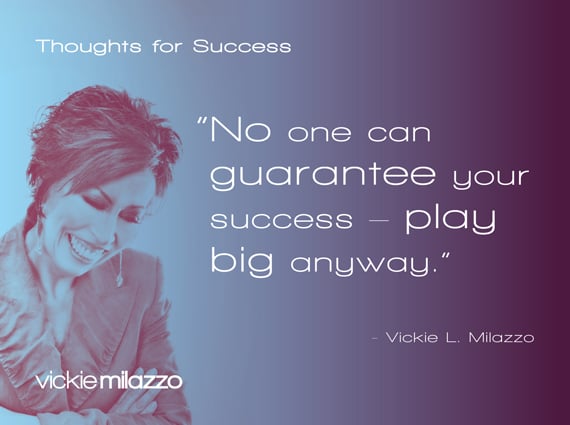 When you start any new venture, you can and should strategize, but you can’t guarantee the outcome. Skydivers break bones, scuba divers get the bends and businesses fail. If you want a guarantee, forget it.

You have to trust in you and your vision enough to show up and invest the full effort with no guarantee of the upshot. That might feel scary, but the only certainty is this: If you do nothing, you’ll achieve nothing.

Since I was four years old I’ve been playing penny poker with my family. We were serious about our poker, so serious that we’d toss our allowance in the pot. As a poker game heats up, winning players stack up their chips until they think they have a really good hand. Then, cockily or quietly, depending on the player’s personality, someone pushes all her chips to the center of the table and says, “I’m all in!” This heavy bettor is hoping to not only capture a big pot but also to take some of the others out of the game.

The other players are wondering, “Does she really have a winning hand, or is she bluffing?” Eyeing that big pot in the middle of the table, they’re questioning whether to fold or go all in, too.

The excitement builds around the table, and the risk-taker inside you comes out, especially if you believe you’ve got the winning hand. You push your pile of hard-won chips into the middle.

Tom, my family and I were playing quarter poker – we’ve upped the ante since I was four – and Tom showed me his hand. Having already dropped out, I whispered, “Go all in, Tom.” He said, “Vickie, I could lose everything.”

If you haven’t guessed, Tom’s the conservative, penny-pinching member of the family who probably wouldn’t go all in if he had pocket aces (that’s two aces in his hand) with two aces on the table. We were playing with quarters here, a pot total of $3.75.

Between his hole cards and what was on the table, Tom had a winning hand but was afraid to take a chance on it. To my dismay, Tom didn’t go all in. Even though he eventually won the hand, he won a much smaller jackpot than he could have. Being the risk taker I am, it left me shaking my head at his timidity.

Then recently, I found myself sitting at a dollar poker table in a real casino, playing Texas Hold ‘Em. I sat there holding pocket aces. Now, all you need to know about poker is that pocket aces is a “go all in” kind of hand. It’s not a guaranteed winner, but it’s as close as you can get in the poker world. It’s a hand that begs you to take all of those treasured chips in front of you and, win or lose, push them to the betting pile. I sat there, holding back, weighing the odds in my head.

Did I go all in? No. I didn’t want to lose my dollars. I was acting as timid with my dollars as Tom had with his quarters. It wasn’t just about losing the dollars; it was about being knocked out of the game. Those aces offered no guarantee I would retain my place at the table. Only a royal flush could guarantee a win. Uncertainty froze my hand to my chips.

Isn’t that what really holds us back from going all in? Aren’t we frozen in fear by the possibility that we’ll be knocked out of the game? And there’s no guarantee we won’t be.

No world champion ever attains such status without going all in. A sure-win is an impossibility. Professional athletes are willing to risk everything to become world champions. They’re willing to go all in, with no guarantee of success, risking being knocked out of the game, and sometimes they will be. But if they intuitively play the right cards, they’ll win big.

That’s why I define success as showing up and stepping out. Showing up today, and paying the price today, determines tomorrow’s success. If you want a guarantee, forget it. Trust your vision, make the investment and the payoff will come.

What happened to me at the dollar poker table? Instead of boldly demonstrating the strength and confidence in my hand, I merely raised and ended up winning a smaller pot than I should have.

What about you? When pocket aces come your way do you show up with no guarantee or do you hold back waiting for the conditions to be perfect and a promise of success?

Don’t hold out for a royal flush. Those don’t show up often. A world champion poker player draws a lot of bad hands. Even if dealt pocket aces, a champion might lose. You’ll draw some bad hands too, but think like a winner, and put your chips out there on the table. You’ve probably already been dealt the hand you need to win.

Thankfully, I was a much better player when I launched my legal nurse consulting business. I had no guarantee that any attorneys would hire me, but I showed up anyway. Starting any new venture, you have no assurance of success, satisfaction or profitability.

Vickie Milazzo Institute is accredited as a provider of continuing nursing education by the American Nurses Credentialing Center’s Commission on Accreditation.