My office officially opens for business at 8:00am. In anticipation, by 7:50 there’s a hoard of marauders forming outside my office door; employees asking for my input on projects, directors telling me they can’t meet a deadline and the occasional random person who’s walked in off the street wanting to know if they’re in the right place for Cirque du Soleil tickets (I’ll be the first to admit my office can often be a circus, but not that kind of circus. LOL!). 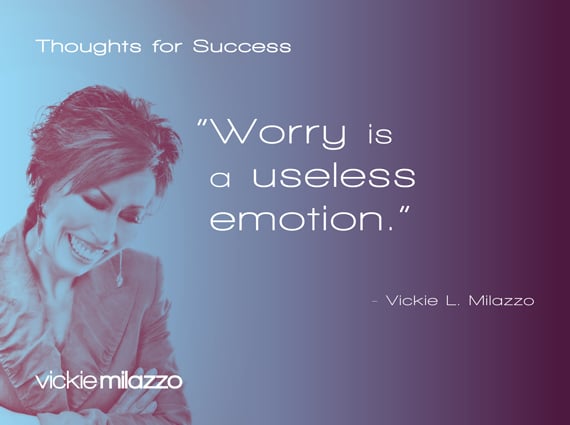 I treat the morning like an extreme sport. While the rest of the world is still in REM cycles, I carve out quiet momentum time. I’m up by 4:00am and use my extra four hours to hunker down and conquer projects that need the most concentration. This allows me to create the space I’ll require for battling everyone else’s issues later.

But yesterday at 4:15am, my flawless strategy was busted worse than a piñata at a 6-year-old’s birthday party. Through the beauty of email alerts, Tom discovered a major company issue that required immediate action by one of our vendors. But the problem with vendors is they’re not on the same time schedule as I am (Note to self: Find early-rising vendors.). So, when the rest of the world (including your vendor) is sleeping, it’s hard to do anything but – you’ve got it – worry. And, worry I did – enough to win an Olympic Gold Medal in the Women’s 120-Minute Solo Worry Event.

I teach that worry is a useless emotion, and while I know this principle through to my core, here I was taking worry to Olympic heights. Worry bore down on me unrelentingly from every direction. The result – what is normally my most productive time of day was a tempest of fruitless emotion that left me drained. Instead of starting my day pumped-up like “The Rock” in a bad action movie, I started my day at a deficit. A deficit that was looking increasingly harder to escape as the day wore on.

Thanks to our amazing vendor (who I sort of apologize to for waking up at zero-dark-thirty – but an emergency is just that, as any ED nurse will tell you) the problem was solved by 7:00am. I could stop half my worrying and concentrate on worrying about the other half – possible repercussions (more useless worrying), which I did until 8:00am when the staff swam my moat, breached the drawbridge and broke through my triple-padlocked office door confirming business as usual.

We’re all human and we’ll find ourselves worrying at some point, even when we know better. In the moment of worry it helps to have a laugh and to recognize worry for what it is – a useless emotion that doesn’t help a bit.

2 thoughts on “Thoughts for Success: Worry Is a Useless Emotion”