One of my favorite Broadway musicals is Hamilton written by Lin-Manuel Miranda. Sure, it’s funny that someone would conjure up a hip-hop and rap musical about the first secretary of the U.S. Treasury Department. 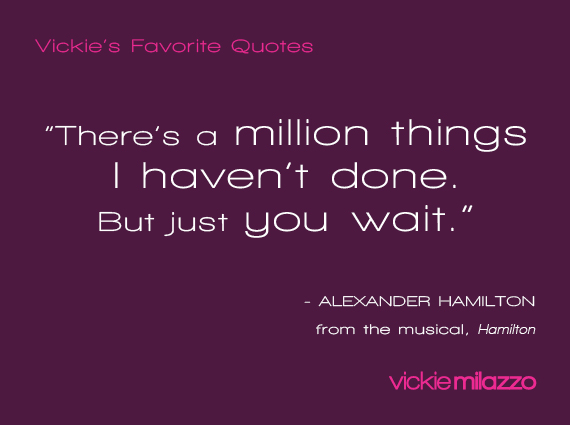 Not to mention that it would be performed at the White House, run on Broadway since 2015 (winning 11 Tony® Awards), run in London since 2017 and continue touring the country since 2017. All of this based on one man, Alexander Hamilton, an intriguing and ambitious character. More than that, he was a prolific writer and profound thinker.

A fierce defender of the Constitution, Hamilton wrote 51 of the 85 essays that make up the Federalist Papers, some of the most important documents interpreting the Constitution and explaining the powers of the executive, legislative and judiciary branches of government. In the musical Hamilton we first meet the character when he sings a song that includes the lyrics “There’s a million things I haven’t done. But just you wait.” Did I mention he was a hard worker too?

That song always strikes a chord with me and I never tire of it. In fact, tomorrow I’m going to see the show for the fourth time. The original Broadway cast is long gone (and yes I was lucky enough to see them) but the musical still resonates and here’s why: I often sing that same lyric to Tom saying, “There’s a million things we haven’t done. Just you wait.”

Every day I wake up with a plan and bust that plan before my second cup of healthy green tea. My “To-do” list probably has more than a million things on it. I’m thankful that I share Alexander Hamilton’s drive, ambition and work ethic. How else will I get to those million things?

Successful Certified Legal Nurse Consultants should have a million things they haven’t done either. It’s always better to have more on your plate than you can do – that gives you something to strive for.

Even if Alexander Hamilton never wrote this favorite quote, I’ll bet he thought it a million times. And I’ll bet that if Hamilton had been a Certified Legal Nurse Consultant instead of a founding father he’d be more successful than anyone – drive, ambition and hard work that’s a sure path to CLNC success.